So, the holidays were crazy and I haven’t posted a single thing. Truth be told, I didn’t cook a single thing over the holiday. That was weird. Since we stayed at Derek’s parents there wasn’t much for me to cook. I wanted to cook but it’s weird to do so in someone else’s kitchen. My mother-in-law-to-be is a gracious host and a great cook so I have no complaints on that score (except she doesn’t keep horseradish in the house).

I did show her how to make biscuits. It’s all in the baking powder, you have to use a lot of it! Oh and a touch of shortening helps too.

January 9 is the anniversary of Derek finding me on Facebook. I celebrated by making one of D’s favorite foods, Gumbo. Cook’s Illustrated comes to the rescue AGAIN! I am telling you that there is nothing they do poorly. They are correct about the roux being the  trick to good gumbo. I have been making roux’s a long time but I have never cooked a roux that long. It made the gumbo rich and layered in flavor. The Andouille sausage I used was also really good. It has come back to haunt me once and that’s amazing! 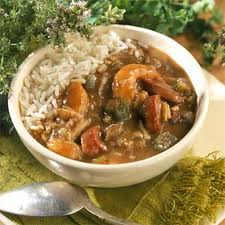 I didn’t have any okra to put in mine but I will next time. Yum-mee! We paired this with the 2004 Montebuena Pinot Noir. Wow! It’s our favorite right now. It’s so good! We also finally drank the champagne that was given to us at my going away party in KC. Chandon does a great champagne!

I suppose I need to get a plan together for 2012 and I do have one. Get a job and get married that’s a big plan. Yippee!