I do but not without a tinge of guilt. In fact, it’s difficult to eat any fish from the sea these days without wondering if it’s safe, if some dolphin or other rare splendid creature had to die as well. Was it fished out of a trash heap? I worry about the state of our oceans knowing how much we abuse them. And yet, I continue to purchase “dolphin safe” tuna and serve it several times a month. Life get’s complicated doesn’t it?

Well, setting guilt aside for the moment let’s talk about tuna salad. I love it. Especially traditional tuna salad, you know the one with mayo, mustard, celery, eggs, etc., served with potato chips. Yuh-uuum-me! Nothing tastier or more traditional in my homestead. Except that, as usual, I get bored with that. I want something different. Something non-traditional that kicks it up a notch or too. You name it, I’ve tried it with tuna: cilantro, red bell peppers, curry, raisins, scallions, lemon, lime, dill, wasabi, yogurt, sour cream, even horseradish. Some of these combo’s have worked, some have not.

Today I tried again to mix it up with unusual ingredients. I happened to have a Jicama which is a root vegetable native to Mexico.

It’s like a radish or turnip. It’s mild, crisp, a touch of sweetness and wonderful in fresh salads.  I minced some up and threw that in the bowl along with Chinese mustard from the packets of left overs we had from ordering in the other night. That’s something else I feel guilty about throwing away. We always end up with way too much mustard, duck sauce and soy sauce and I always think, “surely there’s some way I can use these” invariably I have a giant stash that I throw away once a year. Now that is no longer necessary. The mustard is wonderful in tuna salad. It’s spicy and subtle (if that’s even possible) and the perfect touch for canned tuna.

I think I’ll actually buy a bottle of it to keep on hand. I’m thinking there are other uses for this stuff too.

The other new ingredient I used was a blend of spices I got from a company called Wildtree. I used to work for them as a sales rep and since I’m awful at sales that didn’t last too long. Their products are wonderful. They’re natural, healthful and preservative free. I happened to have some of their Dill Blend spice hanging around and I thought it would be a nice combination to add with the rest and voila! Tasty goodness was right under my nose. Click on the picture and it will take you to their website. 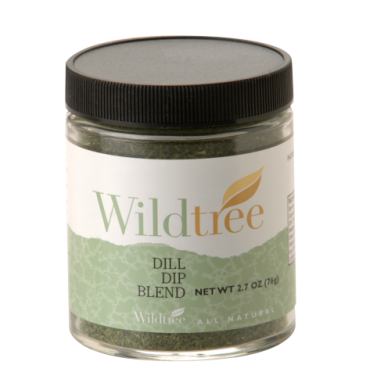 I also threw in some of the traditional stuff: onions, celery, boiled eggs, mayo … you know the drill but the addition of these three ingredients made for a wonderful change and delicious lunch. Yuh-uuum-me!